October 29, 2022, Denver – With just 15 remaining members at the beginning of 2022, the pandemic and other factors had generated challenges for the Mile High Denver Bailliage. Reemerging with new leadership and direction, the Bailliage Board worked diligently to plan a creative and dynamic calendar for members with themed, BYOB wine tasting events, and frequent and exciting casual events along with the traditional Chaîne, coursed dinners.

One of the new Chaîne members is Maître Rôtisseur Chef Elise Wiggins who hosted the October induction dinner at her restaurant Cattivella. Her passion for bringing people together, treating them as family, and, well, of course, exceptional food made the event even more remarkable. She created an amazing menu which took members on a culinary journey to the Piedmont region of Italy which featured the world’s best truffles.

Wine pairings were curated by sommelier and distributor Angelo Rosalia of Vinifera Imports. Even the sparkling wine was from Piedmont, but the real showstopper was the twelve-liter bottle of 2010 Barolo. Serving that size of a bottle was definitely a two-person job and somehow- even with five other wine pairings – the bottle was finished at the end of the evening.

The Mile High Denver Bailliage is eager to carry the excitement and momentum into the new year. Denver is honored to be hosting the 2023 National Grand Chapitre. We look forward to seeing everyone here for exhilarating culinary adventures and camaraderie in Colorful Colorado. 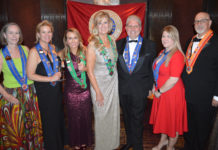 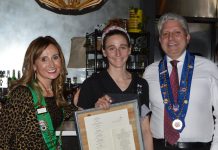