October 10, 2022, Jackson – For the fifth time since 2012, the Jackson, Mississippi Chaîne Bailliage returned to Bravo!, the landmark Italian themed restaurant known for its exceptional service, outstanding food and wine, and warm atmosphere. On the night of October 10, the Bailliage was able to dine inside for the first time in two years following several Chaîne dinners on the Bravo! terrace during the pandemic.

Bravo! has been a Jackson tradition since opening in 1994 by founders Jeff Good, co-owner, and Dan Blumenthal, co-owner and Executive Chef. In addition, Dan is a Maitre Rôtisseur. Bravo! has received the Wine Spectator “Award of Excellence” every year since 1997 and is the subject of a book written by Dawn Dugle, The Bravo! Way: Building a Southern Restaurant Dynasty that chronicles their ascent on the culinary scene.

Jeff and Dan own several restaurants in the area plus a successful catering service. The restaurant closed to accommodate the Chaîne function, an event they consider a privilege and an honor to host. Chaîne members always consider it a privilege to dine at Bravo!, so the feeling is mutual and the Bailliage continues its love affair with “anything Bravo!”

The newest “Bravo Buzz” is the addition of Chuck Nix, certified Sommelier with the Court of Master Sommeliers and certified Specialist of Wine with the Society of Wine Educators. He was an instant hit with the Bailliage. Chuck has focused on wine for the past six of his 20 years in the food and wine industry. Tanya Burns, the forever loyal service manager, helped orchestrate the flawless evening. Jeff Good’s hospitality and management skills, and Dan’s in-depth commentary on each food course rounded out an evening to remember. 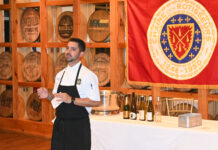 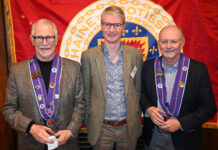 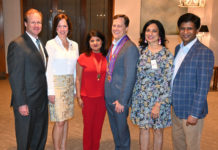 Countryside Dining in Jackson with a Rising Star Chef 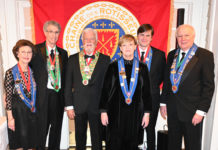 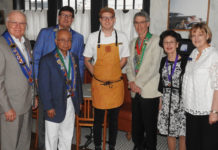