Dec. 12, 2021 Memphis – If Chaîne des Rôtisseurs is considered the Grand Dame of Gastronomic Wine and Food Organizations, then it is fitting that our year ending event be held at the “South’s Grand Hotel”. The Peabody Hotel is legendary for its charm, elegance, gracious hospitality and rich storied history with a style and tradition befitting a memorable evening with the Chaîne des Rôtisseurs. While the beginning of the Peabody in 1869 makes it a baby in comparison to the 1248 start date for the Chaîne, the opulent front lobby area with its two-story ceiling, detailed woodwork, large center flower arrangement along with the water feature and the daily ritual of walking their five mallard ducks to the water feature and then returning them to the roof top sanctuary makes this a special venue for our annual Christmas Party and Induction Ceremony. Add in the magnificent Christmas decorations and you have the makings for a memorable event.

While the holiday spirit and an Induction Ceremony drew the interest of the members, the talents of the Peabody’s Five-Star Chef Andreas Kisler were a strong motivation to attend this event. Chef Kisler brings a passion for innovative, creative cooking as well as European grace and style from his native Austria, beginning his journey at the age of 15. He worked his way from Vienna to Paris, then back to Vienna, and then in 1982 to the US where he took charge of the Vienna 79 restaurant in New York as Executive Chef, being voted one of the 13 Best Chefs in New York.

He’s written a best seller called Viennese Cuisine: The New Approach (Doubleday, N.Y.) seeing it reach The New York Times best-seller list. Wanderlust carried Chef Kisler to the west coast for 14 years serving various high-end restaurants, then receiving an opportunity to be Executive Chef at The Peabody Hotel in Memphis, Tennessee where he has been since 2000. He’s received numerous awards, made numerous television appearances, been published in various publications such as Gourmet, and has cooked at the James Beard House twice. In 2019 Chef Kisler was named Chef of the Year by the Memphis Restaurant Association.

The evening for everyone began with a walk through the magnificent Peabody’s grand lobby with its 30-foot decorated Christmas tree and then a brief stop to see the Peabody Ducks enjoying themselves in the center pool, waiting to be escorted by the Duck Master onto the red carpet up to their home on the Penthouse floor. Their trip from their home to the lobby and back takes place twice a day and is enjoyed by all who visit the Peabody.

Entering the Forest Room on the Mezzanine level, everyone was impressed by the space and paneled walls with the view of downtown Memphis. A choice of aperitif wines waited for each guest, whether they preferred a Beringer Napa Sauvignon Blanc, a Brut Rosé Champagne from Orban, a Chalk Hill Chardonnay or a Santa Barbara County Pinot Noir. The aperitif of choice worked well with the passed hors d’oeuvres of either a smoked trout mousse with a radish slice canapé, a mushroom tartlet or a bruschetta with tomatoes and balsamic vinegar reduction. The welcoming period was well received as we enjoyed the time to see each other at this festive occasion and enjoy a three-piece string ensemble providing background music.

The Induction Ceremony was held for our 13 new members who had the good fortune to have a special guest to perform their Induction Ceremony. The invited Guest of Honor was Thomas E. Cassidy, Jr., Conseillier Gastronomique Etats-Unis Honoraire, and his wife Mary Lynn Cassidy, Vice-Chargée de Presse Hon. who are former members of the Memphis Bailliage, who now live in The Villages in Florida; but still call Memphis home. Tom gave a brief history of the Chaîne des Rôtisseurs before proceeding with the formal Induction Ceremony for the new members listed below, including the laying on of the sword.

Bailli George Chandler made several special announcements and presented several awards which are worthy of note:

Dinner followed the Induction Ceremony, beginning with an amuse bouche of a crab ball starter, which was followed by Arugula salad and baby frisee with cranberries, roasted butternut squash and pistachio with a pomegranate molasses dressing. The salad was paired with a 2018 Illahe Tempranillo Estate Rosé from Willamette Valley, Oregon. Marne Anderson, Vice Conseillère Culinaire, provided some comments about the wine and how it paired with the salad.

The salad was followed by porcupine sea scallops which were crispy kataifi filo (looked like porcupine quills) wrapped sea scallops and a preserved lemon beurre blanc. A glass of 2017 Domaine Anne Gros Bourgogne, Hautes-Côtes de Nuits “Cuvée Marine” was paired with this course. The “Porcupine” presentation of the crispy kataifi filo was interesting.

A quick respite between courses was complemented with a lemon vermouth sorbet helping to cleanse the palate as we headed to the main entrée, a filet mignon with porcini mushrooms, potato, carrot and parsnip stew with BBQ cauliflower and red beet nest. The filet was prepared medium-rare and was quickly devoured along with the sauce and sides. The side-by-side wine pairing of a 2012 Concha Y Toro Cabernet Sauvignon from Don Melchor, Maipo Valley, Chile along with a 2014 Von Strasser Cabernet Sauvignon from Diamond Mountain, Napa Valley offered a nice comparison of two styles of Cabernet, which both worked well with this dish.

If the main course wasn’t enough, dessert was presented, and it was fantastic. Of course, chocolate usually is; but, this was especially spectacular with the presentation, variation, taste and general satisfaction. This caramel turtle banana tart with whipped hazelnut ganache and espresso anglaise was almost too pretty to eat; but we all did out best. The pairing with a glass of Matusalem Grand Reserva Rum from the Dominican Republic capped off the dinner in grand fashion. For anyone who was not full, the Chef provided a mignardise of a macaroon and a piece of coated soft jelled candy, a tasty treat to end the evening.

As the wishes for a Merry Christmas and Happy New Year and Happy Hannukah echoed throughout the room, everyone realized that it was great to be able to end our year in this festive manner, considering all the past issues we experienced this year.

From the Memphis Bailliage to all our sister bailliages, in whatever manner you celebrate, we wish everyone a very Merry Christmas and a Happy New Year! 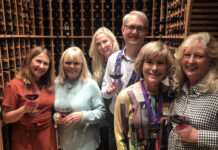 Fall Brunch at the Dragutsky Home 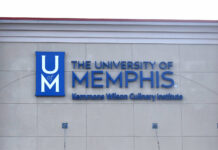 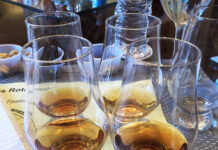 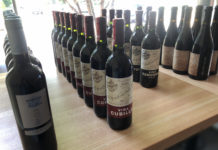 Tonica – Tapas and a Touch of Spain! 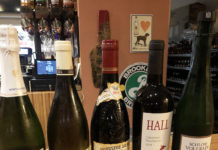