Trivia: Who cooked for Academy nominees John Krasinski and Emily Blunt repeatedly while they were filming together in Buffalo?
Answer: Oliver’s chef phenom Ross Warhol!!

Chef Ross completed practical training experience at Alinea, El Bulli, French Laundry as well as Frantzen/Lindberg and completed formal education in culinary arts at the CIA in Hyde Park and CIA in St Helena. The New York Times wrote about him and he was featured at a James Beard Dinner. Our event was so lucky to have him in Buffalo.

The merit is shared with owner and Maître Restaurateur Dave Schutte, also educated at the CIA, who has taken Buffalo’s standard- bearing restaurant Oliver’s to the next level with his dedication to excellence. 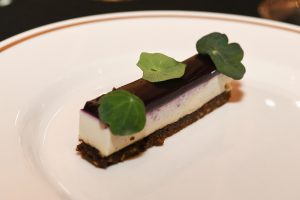 Tonight’s festivities on October 20 were no exception to their talent. The venue for the evening, The Buffalo History Museum, was a breathtaking backdrop to the culinary tour-de-force. Originally constructed as part of the Pan American Exhibit of 1901, it is an architectural treasure. Current exhibits include one on the Womens Suffragette Movement and Buffalo’s Professional Sports Icons. Guests also had fun on an Insider’s Tour of Meet the Press that was hosted for many years by Buffalo’s beloved Tim Russertyears by Buffalo’s beloved Tim Russert. 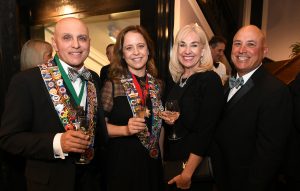 After a tour of some of the current exhibits, the select group of guests retreated to the grand hall for refreshments and passed hors d’oeuvres. The event oversold, the forty-seven privileged guests included Albany Bailli William Harris and his VCG Holly Katz, and visiting Atlanta Bailliage members James and MaryAnn Macie. These honored members enjoyed the exquisite taste of the eight courses which was matched only by the artistic culinary presentation. The pairings, selected by Vice Echanson Sharon Osgood and Bailli Honoraire Robert Leighton, complemented the meal perfectly.

Maîtres Rotisseur Joe Piazza discussed the menu, and its many highlights. The evening ended with Mr. Schutte, Mr. Warhol, their kitchen and service staff being presented with pins and gifts in recognition of their stupendous performance. This was yet another opportunity for all present to enthusiastically affirm their commitment to the Chaîne.

Stillwater Farm Fresh – A Return To Dining Amid COVID

So brisk was the registration for the return of the Buffalo Chaîne...
Read more
Buffalo

Truffle off to Buffalo

Travel in the Time of COVID