On Nov. 25, 2018 as the sun was setting across the balmy shorelines of the Virgin Islands, the St. Thomas members of the Bailliage des Iles Vierge boarded the 5 o’clock evening ferry to the island of St. John. Upon arrival, members from St. Thomas were greeted with enthusiasm by their St. John Consœurs & Confrères. During their brief two-minute walk from the ferry dock to La Tapa restaurant the members imagined they were teleporting to San Sebastian, Spain.

Restaurateur and Executive Chef Alex Ewald had just recently arrived back to St. John, returning from a marvelous trip to the Basque Country. After attending the San Sebastian Gastronomika Congress, Alex was invigorated with inspiration to host a Chaîne dining event that focused on Pintxos Y Vinos (tapas paired with wines).

This was the first gathering of the Bailliage Iles Vierge since the destructive hurricanes Irma and Maria swept through the islands in September 2017. Throughout the evening waves of warm friendship and food-loving-camaraderie flowed through the room as members reunited for the first time, in over a year, around their shared passion for culinary art and fine wines! As members enjoyed the seven paired courses, “Vive La Chaîne!” could be heard echoing from each table as they raised their glass and touted their appreciation for the much-needed gathering. 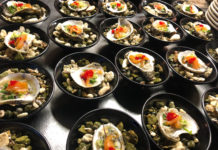 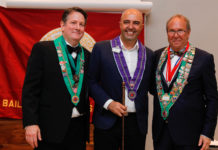 An Induction Worth Waiting For