The weekend of March 1-3, 2019 served as a gathering of four Young Chefs from the Southwest Region – Kevin Donovan of Second Bar + Kitchen in Austin; Jose Estrada of Mercat Bistro in Dallas; Daniel Pinesette of Galveston College in Galveston; and Oakley Wilson of the St. Julien Hotel and Spa in Boulder. A relaxed gathering and dinner at the Art Institute of Dallas on Friday night put all the chefs and supporters at ease before the competition began early Saturday morning. Facing a challenging mystery basket prepared by Maître Rȏtisseur Leslie Bartosh that included duck, redfish, buckwheat, chia seeds, kumquats and rhubarb, seemed to not perturb the young chefs.

After menu development and three hours of cooking, the tireless chefs presented their entrees. Many of the dishes were as attractive as they were tasty and the judges had the difficult task of choosing the winner. They decided to keep the participants in suspense that afternoon before the verdict was announced at an excellent Italian dinner at Dolce Riviera the same night. Local Dallas and Fort Worth members joined Bailli Provincial Bill Salomon, the Baillis and the Regional Officers who cheered on their candidates. Chef Kevin Donovan of Austin won the top award and the opportunity to showcase his skills in the national competition in Pittsburgh in May.

Replete with a warm and cozy Italian dinner on a wintry Dallas night, attendees were rewarded by their support of the young chefs who, even if they did not win, felt their time was well spent and their careers enhanced by the challenge of the day. 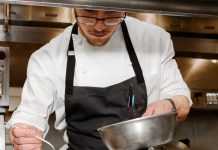 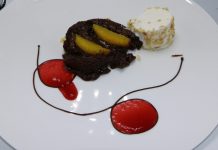